Doctors of the World and the Department of Communication and Development Studies of The University of Bamenda, Tuesday, February 15th, 2022 announced the winners of the audio-visual documentary contest which centered on promoting advocacy against Gender-Based Violence.

Doctors of the World and the Department of Communication and Development Studies of The University of Bamenda, Tuesday, February 15th, 2022 announced the winners of the audio-visual documentary contest which centered on promoting advocacy against Gender-Based Violence.

The competition which was launched on November 24, 2021, had 13 entries; 7 radio and 6 video documentaries centered around the types, consequences, and prevention of Gender-Based Violence with 3 winners declared from each of the sections. 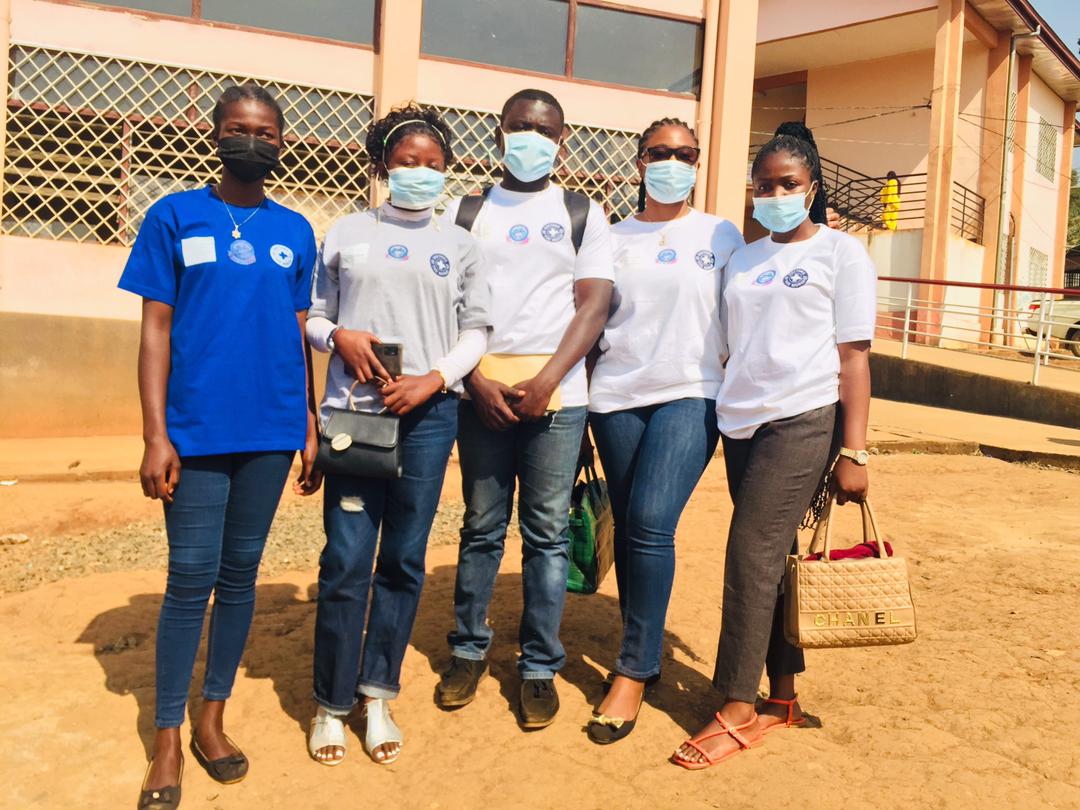 Some of the winners

The ceremony to award the prizes took place at Amphi 340 in the University of Bamenda and was presided at by the Deputy Vice-Chancellor in charge of Teaching, Professionalisation and Development of Information and Communication Technologies (DVC/TIC), Prof. Suh Cheo Emmanuel, the personal representative of the Vice Chancellor. 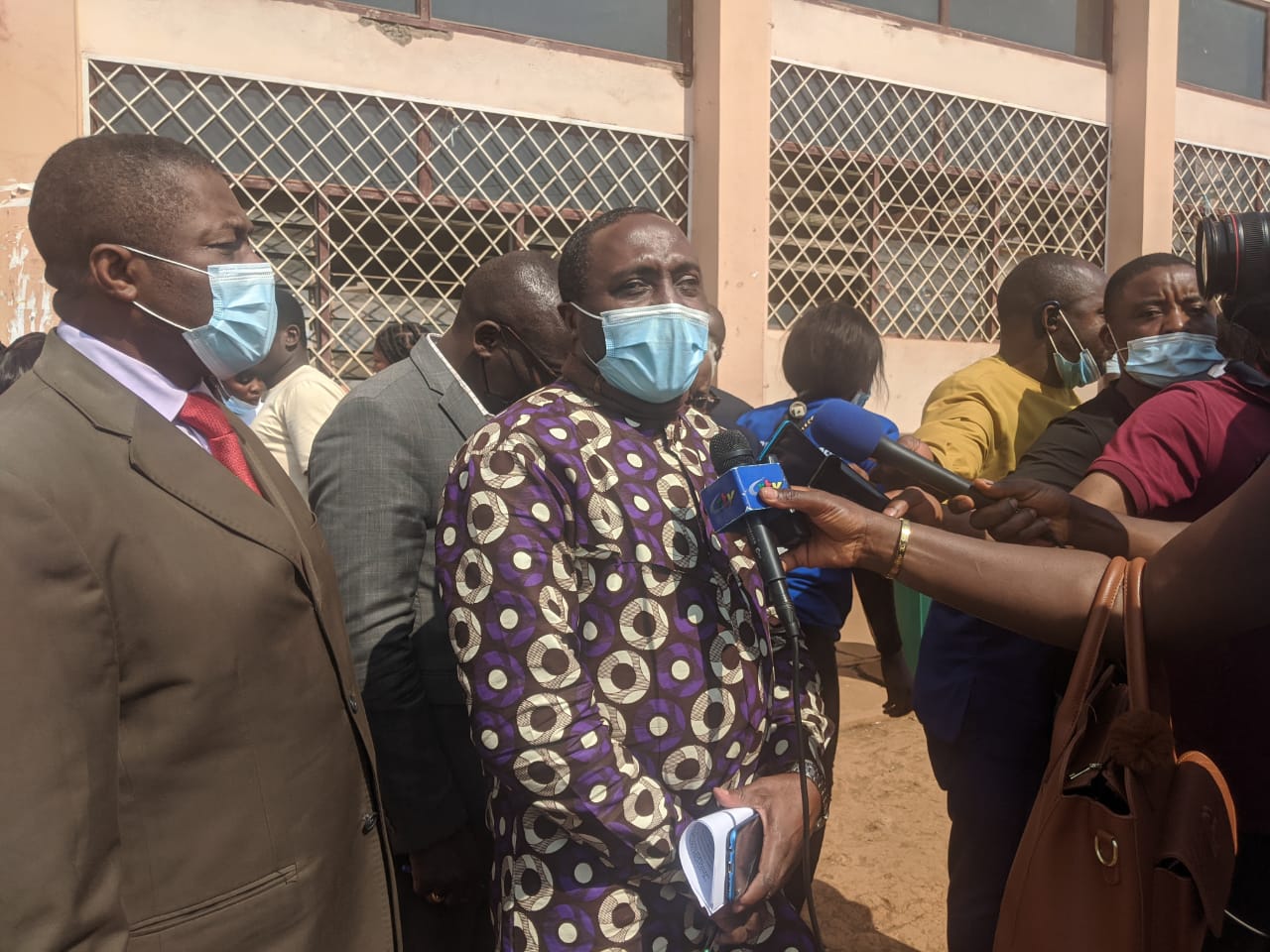 To Prof. Suh Cheo Emmanuel, this particular project by Doctors of the World with the department of Communication and Development Students stands out because it addresses a theme that is important to the community at large and higher education in particular.

He reiterated that the Vice Chancellor of The University of Bamenda has hammered on the fact that the university cannot discriminate on any basis.

In his opening address, Prof. Canute Ngwa, Dean of the Faculty of Arts, appreciated Doctors of the World for such an educative initiative and also encouraged students in the pursuit of ending Gender-Based Violence to never stop.

"Be exemplary leaders and trigger a change in action towards GBV on campus and in your communities. To the representative of Medicine Du Monde, thank you. We welcome all avenues of future corporations and strengthening of ties between your organization and the Faculty of Arts", he said. 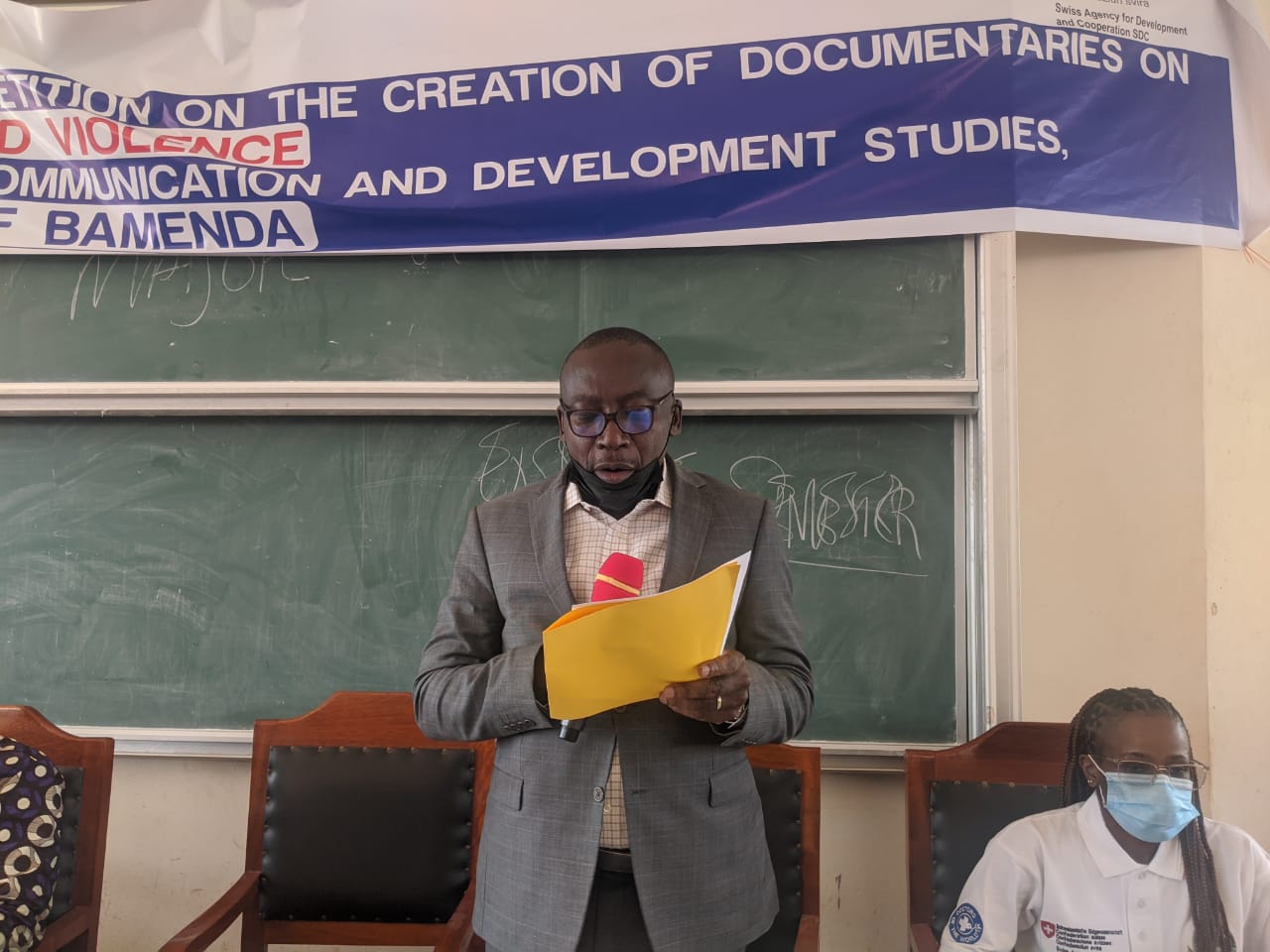 Prof. Canute Ngwa, Dean of the Faculty of Arts

Doctors of the World upon declaring the overall winners of both the video and audio documentary in the likes of Adoration Penkwang, Senjoh Noella, and Ngwi Brandy respectively, showcased their video and audio submissions to the students and staff in attendance. 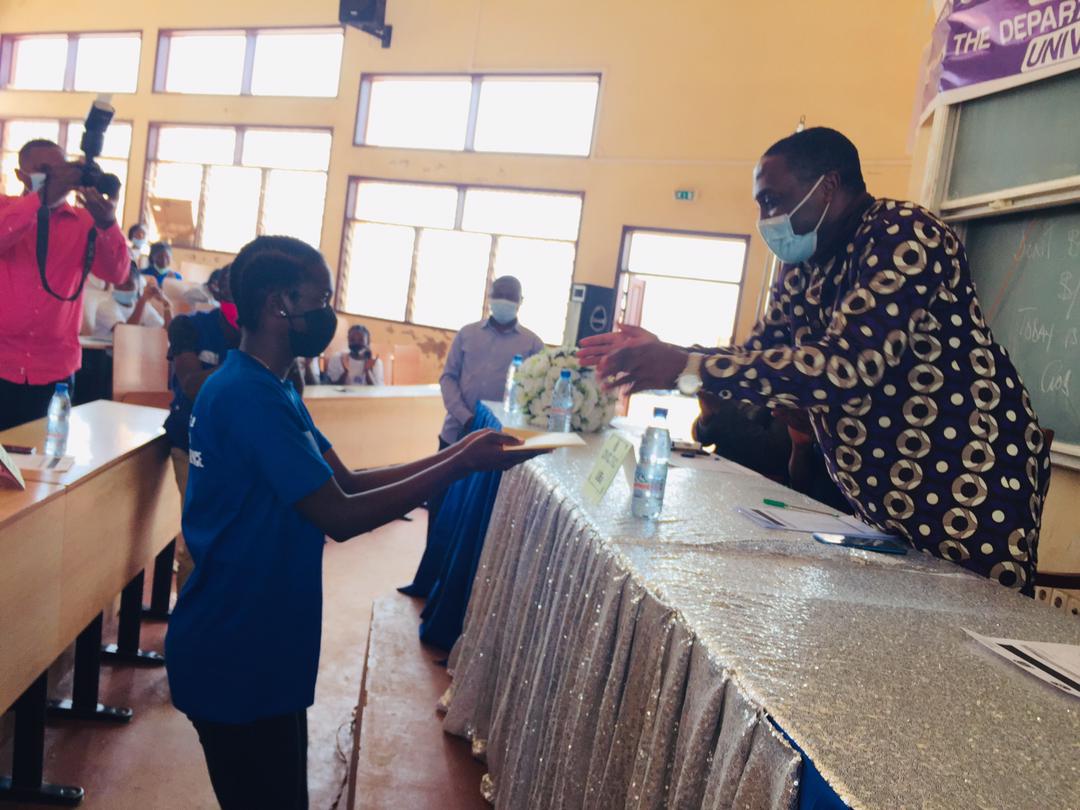 Penkwang Adoration receiving her prize from the representative of the VC

While thanking Doctors of the World for the opportunity to speak out, Adoration Penkwang who won a cash prize of 300.000FCFA said more actions will be taken by her in the fight against Gender-Based Violence. 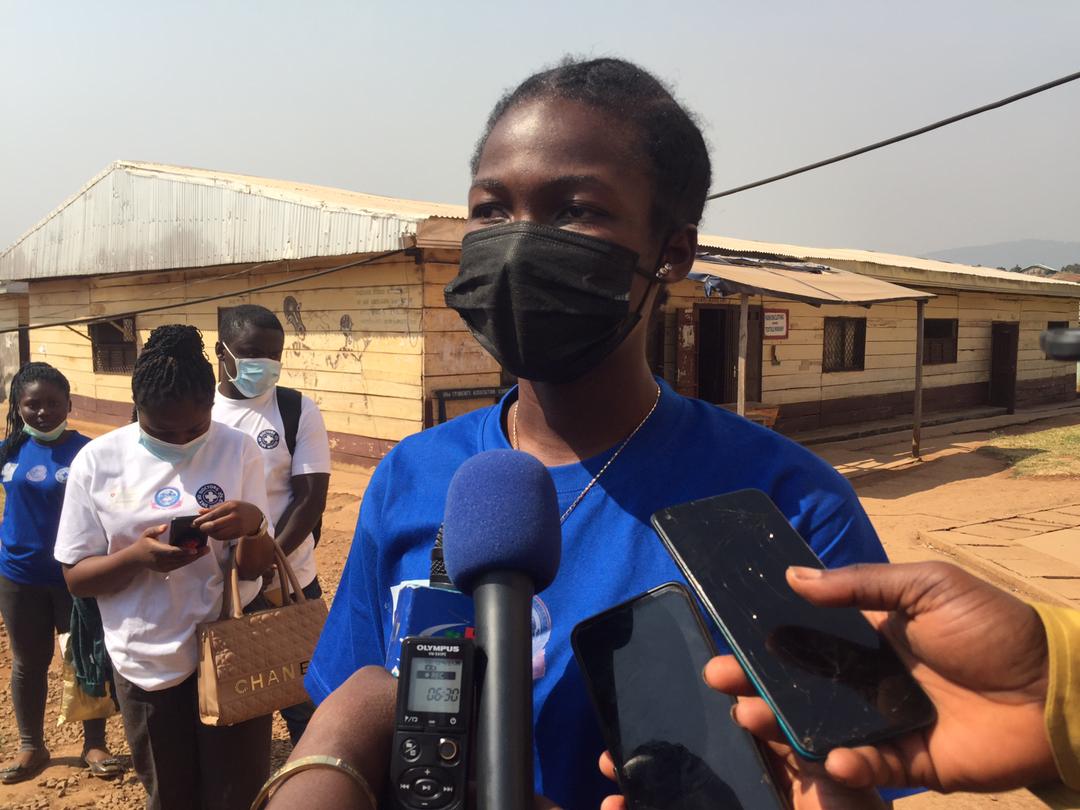 With the high prevalence of Gender-Based Violence among the female and male sex in the academic milieu, especially in institutions of higher learning, the project manager for Doctors of the World, Yensi Helen explained that the Communication and Development Studies department was a great choice for the project because it is aimed at training these young communicators on how to report issues of Gender-Based Violence without stimulating stigma.

"In as much as we are working on Gender-Based Violence, we also want to look at how this young growing communicators can work in collaboration with others to end GBV. Victims of GBV are often stigmatized due to the way media persons report about GBV. So if we train them on how to report, it's going to help us see how we can reduce the stigmatization a lot of survivors face their pictures are exposed or their story reported with their names", Yensi Helen highlighted. 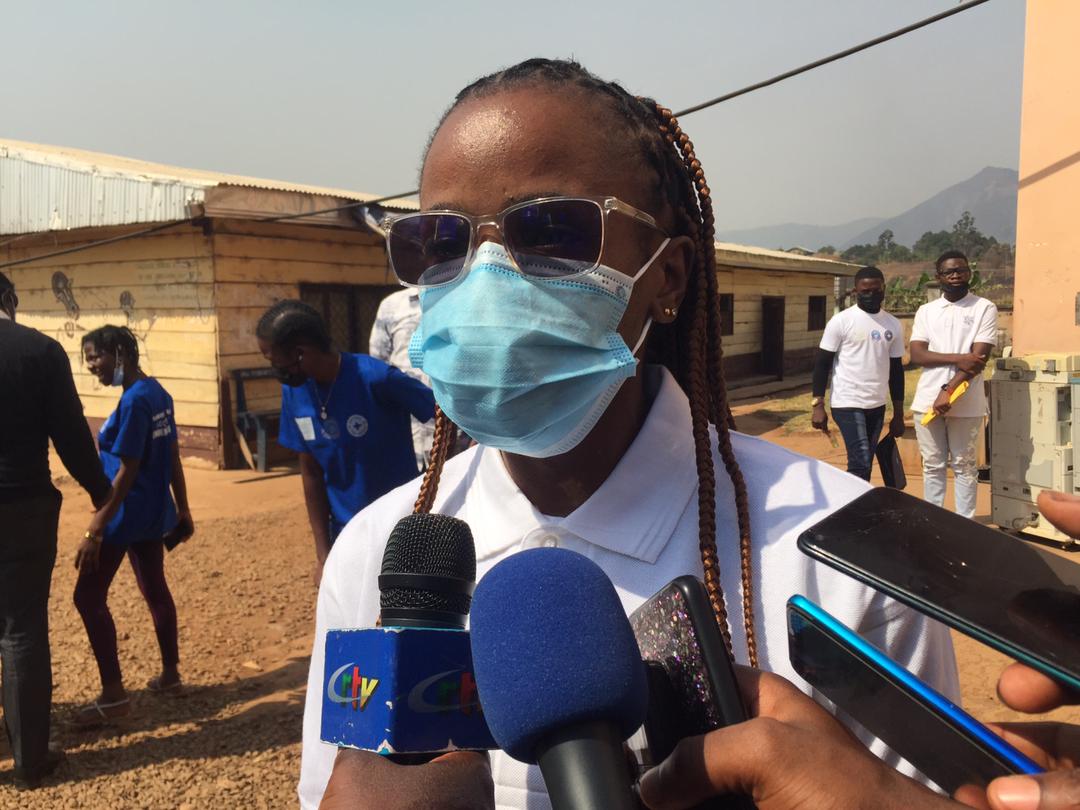 Yensi Helen, Project Manager of Doctors of the World

Worth noting is the fact that for the video documentary, the 2nd, and the third prizes were won by Masters 2 students. Ngwa Nora came second winning a cash prize of 200,000FCFA, while Akalambi Claire emerged third with a cash prize of 100,000FCFA.

The winners of the audio documentary all emerged from the level 500 class with the overall winners handed a cash prize of 200,000FCFA. Laura Malou who came second bagged home 125,000FCFA and Amabo Chris who emerged third had 75000FCFA.